Every year Barcelona becomes the stage for some of the best bands and DJs in the world to regale us with their music.

Whilst there are dozens of music festivals that take place between spring and autumn, there are three that Steel Donkeys never fail to put in their calendar….

Taking place at the end of May every year, Primavera heralds the start of the summer festival season – and indeed summer in general! Progressive and pioneering acts from every corner of the globe descend, and the organisers always succeed in getting a mix of the most relevant new acts and superstar headliners on the roster.

The concrete mega-zone, Parc del Forum, plays host, and the venue seems purpose made for the dozens of stages that spring up for the occasion.

Playing in 2018 will be Arctic Monkeys, A$AP Rocky, Bjork, Chvrches, Fourtet, Charlotte Gainsbourgh, Nick Cave and the Bad Seeds and Belle & Sebastian, to name but a few.

One of the world’s foremost electronic music festivals, Sonar is a ribald rave up that takes place over three days and two nights in mid-June.

By Day the party takes place at Fira Montjuic and there’s a chilled vibe as people check out funky live acts and the more thoughtful side of EDM. By Night the action moves over to Fira Gran Via where big name DJs keep the crowd stomping until way part dawn.

Don’t expect to get much sleep basically!

In 2018 innovators such as LCD Soundsystem, Gorillaz, Diplo, Laurent Garnier, Modeselektor, Thom Yorke, Wiley will all be spinning tunes or performing live.

The least trendy event on this list, Cruilla might just be the most fun. Like Primavera Sound it takes place at the epic Parc del Forum, but it’s line up is more accessible for the every day music fan, and you don’t have to be a diehard indie fan boy/girl to recognise most of the bands on the roster.

The philosophy of the festival is to take from every genre, meaning there’s literally something for everyone, and ticket prices are more affordable than Sonar and Primavera.

The action takes place in mid July, and touching down in 2018 are Jack White, Prophets of Rage, N.E.R.D, Kygo, The Roots, Justice, David Byrne and Orbital… so lots to look forward to!

Remember, if you’re coming to Barcelona this summer, and you want to combine some sightseeing with the music, then consider booking yourself on a kick ass Steel Donkey bike ride.

We’ll be expanding our new Barcelona blog in the coming weeks, so stay tuned for more insider tips. 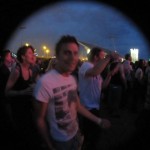